The most insane book I’ve ever read 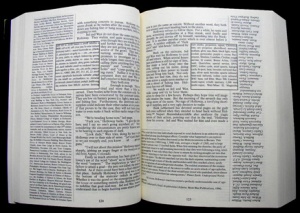 I would be doing literature a disservice if I didn’t first qualify what I’m going to say with the fact that I have never read Finnegan’s Wake. When I talk about insane books, it would be hard to leave it out, but I’ve not tried, so I have no basis of comparison.

With that out of the way, I have to say that House of Leaves is perhaps one of the most insane books I’ve ever read.

Why? For the following reasons:

Much like the Infinite Jest (though for different reasons) House of Leaves is not an easy book to read. Its author, Mark Danielewski, is known for experimenting with form. One of his books, for example, features two characters’ perspectives of the same events. It requires the reader to constantly flip the book to get both sides of the story.

House of Leaves is like that too. The reader must constantly flip back pages, turn the book over, re-read for clarity, etc. All this makes for a very active reading experience. It’s also one that couldn’t translate to ebook (though supposedly it’s being worked on). It’s not something I would want to do all the time, but I definitely enjoyed the experience.